Will seasonal flu be a problem this year?

As seasonal flu starts up again in the Northern Hemisphere, it’s worth taking a quick look at what’s happening in the Southern Hemisphere. Recent experiences ‘down under’ indicate what may happen this year in the UK.

Every year in the Southern Hemisphere, usually from May to October, influenza spreads between Australia, New Zealand, South Africa, Argentina and everywhere in between.

The strains of virus circulating in the Southern Hemisphere during this time are the basis for the vaccines used each winter in the Northern Hemisphere.

The picture from the Southern Hemisphere

The World Health Organisation (WHO) has tracked flu cases in member countries for the last 70 years. In the first two weeks of August last year the WHO tracked 200,000 influenza tests in laboratories in the Southern Hemisphere.

Historically, they have found between 3-4,000 positive cases in the same period each year, going back decades. In 2020 they found 46 positive cases.

It’s as if flu has almost been eradicated by the pandemic.

The WHO continue to say the data needs to be interpreted with caution. The pandemic has clearly influenced health behaviours, as well as testing priorities and capacities in Member States.

They state (with some notable understatement) that “the various hygiene and physical distancing measures implemented by Member States to reduce SARS-CoV-2 virus transmission have likely played a role in reducing influenza virus transmission.”

There are four main types of flu virus; A, B, C and D. However, seasonal flu infections in humans are nearly always caused by type A and B (and only type A viruses have caused flu pandemics). These four types are themselves split into sub-types, clades and sub-clades.

It is these sub-types that are showing some remarkable impacts from covid too. One main sub-type of flu virus (B/Yamagata) already seems to have been almost eradicated from circulation. It seems very few types of flu virus are emerging unscathed from covid pandemic.

Sadly, flu may be down, but it is definitely not out. The inexorable growth we’ve all seen when viruses spread exponentially means it could come back in big numbers very quickly indeed. We have far fewer restrictions in place than Australia, which means we cannot rely on their experiences to predict our own season. If flu starts to spread here, it could spread fast.

WHO surveillance shows India may be seeing flu cases take off again. The data shows just how quickly cases can rise, once the virus starts spreading again. 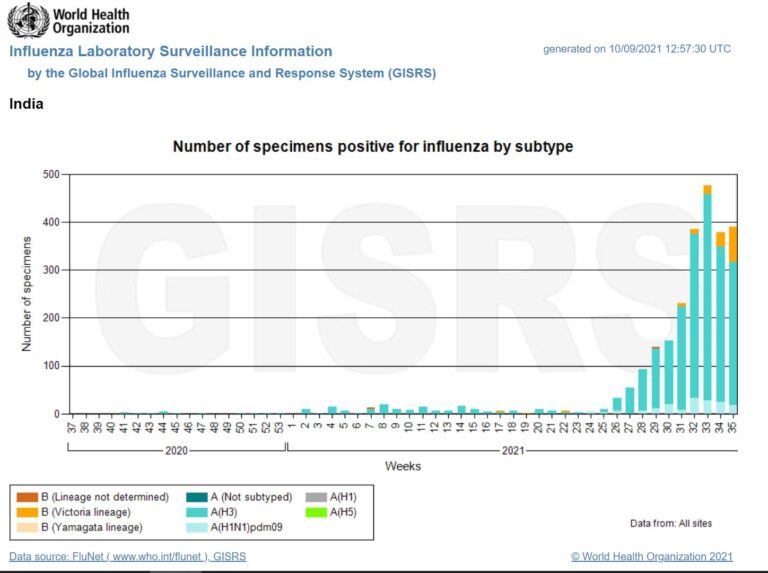 There are also serious questions about the level of immunity we may have as a population because our natural exposure to the virus has been so markedly reduced. Even a less virulent strain of flu could cause big problems in the future.

If we continue to have very low flu cases for another year our population as a whole will be even more greatly susceptible to infection. That means the risks that severe flu poses remain on the table for this year and next year.

Public Health England (PHE) and the Joint Committee on Vaccination and Immunisation (JCVI) have recently updated their guidance for medical practitioners to suggest that flu vaccines may be offered in conjunction with covid boosters from September.

PHE guidance is strongly linked with the JCVI guidance, which is currently that flu jabs should be offered at the same time as covid jabs. The JCVI have noted “this advice may change substantially” on all their guidance though.

Trials are currently underway to assess the safety and efficacy of giving covid boosters and flu jabs at the same time. Although the early indications are that it should be fine, nobody knows for certain.

If a double vaccine is delivered at the same time, it will be in a staged approach (as with the initial covid jabs) targeting those at greatest risk first (aged, immuno-suppressed, health & care workers etc).

As the majority of adults in the UK are only getting their second jabs during July/August this year, it is probably more likely than not that anyone under 50 who does not have pre-existing conditions (or is a key worker) is likely to be advised to source a flu jab independently.

Given that covid boosters for the majority of adults in the UK are also unlikely to start before Jan/Feb, the case for giving flu jabs at the same time is then markedly decreased anyway, as the flu season usually draws to a close in late Feb/early March.

That in turn means it is still just as important as ever to get vaccinated, with both flu jabs and covid jabs, at the earliest opportunity. Although there is less flu virus circulating at the moment, the risks it poses have sadly not diminished.