The limits of COVID antibody testing

Testing for COVID-19 antibodies is intended to show is a person has previously been infected with SARS-CoV-2.

Although many tests are being marketed commercially, very few have been rigorously tested, assessed and approved by Public Health England (PHE).

The largest independent pathology laboratory in the country, The Doctors Laboratory (TDL), has recently completed a detailed evaluation of the two most well know approved tests. TDL evaluated the Abbott Architect SARS-CoV-2 IgG and the Roche Diagnostics Elecsys Anti-SARS-CoV-2 assays.

The role of antibodies

Our immune systems react to the coronavirus infection by producing antibodies from a few days to 2 weeks after the onset of symptoms. Specific antibodies (called “IgG”) are produced in the later stages of infection. The persistence of IgG antibodies in the body allows identification of people who have been infected by COVID-19.

Testing requires a small blood sample, which can be provided at home (with a visiting phlebotomist or nurse) or in a clinic. Only the Roche test is currently licensed for capillary (finger prick) testing at home.

Although both the Abbott and Roche tests detect antibodies, the Roche test is a “total” antibody test. It detects both types of antibodies produced in the body (IgM and IgG). Both tests use the same viral antigen, nucleocapsid protein, to find antibodies against SARS-CoV-2.

It is thought that antibodies against the nucleocapsid are made earlier in the immune response compared to those against other viral antigens. However, as each persons’ immune response to SARS-CoV-2 infection is different, it is possible to be positive in one assay and negative in another. 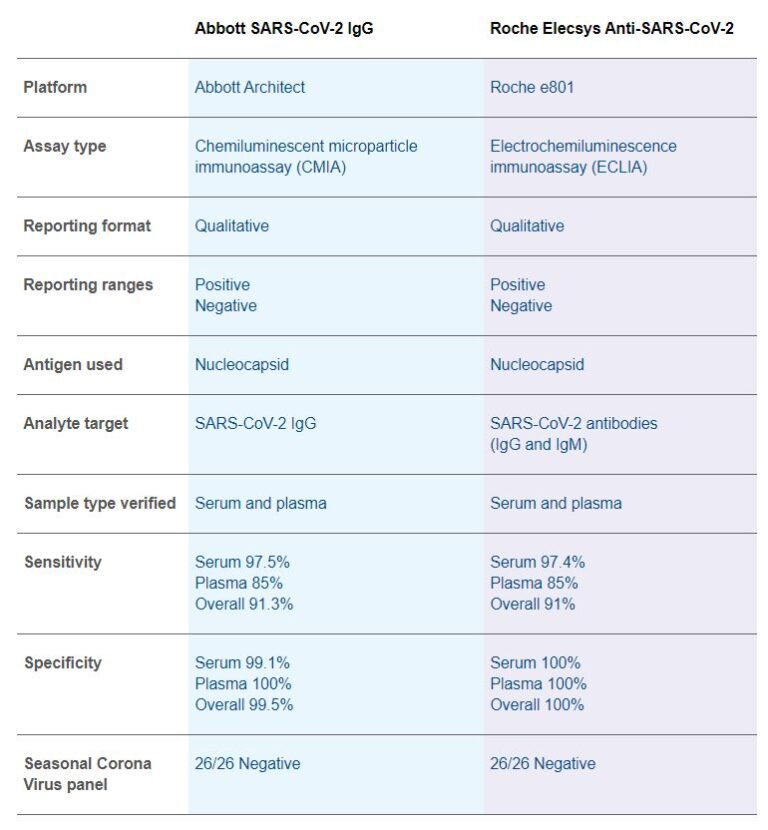 Even almost a year into the pandemic, our immune response to SARS-CoV-2 continues not to be fully understood. The significance of having antibodies against the virus is not known.

It is still not currently fully understood if a positive result with one test provides more evidence of protection, when compared with another test.

Nobody knows how long the antibodies will remain detectable after infection by SARS-CoV-2. This means that an individual who has a confirmed infection (by PCR ‘swab’ test) could have a negative antibody result.

This could also be true if the blood sample is taken too soon, or too long after infection. The accuracy of the tests reduces markedly as the period between infection and testing grows.

At best, COVID-19 antibody testing only gives information. Exactly what that information means for employees or businesses is still unclear.